This morning I walked around the rather scrappy rice paddies close to our accommodation at Assaradevi Resort to the south of Chiang Mai.

Highlights in one and a half hours included a fine male Red Avadavat carrying nesting material (with a second bird heard calling), a male Pied Harrier,  a Common Rosefinch, two Chestnut-tailed Starlings, a couple of Zitting Cisticolas, a Wire-tailed Swallow, one Thick-billed Warbler, a pair of Pied Bushchats, several Siberian Stonechats , one Indochinese Bushlark and a flock of White-rumped Munias. 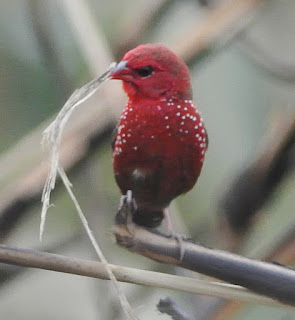 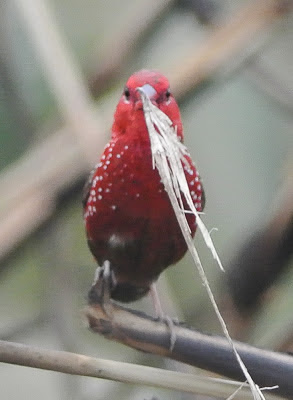 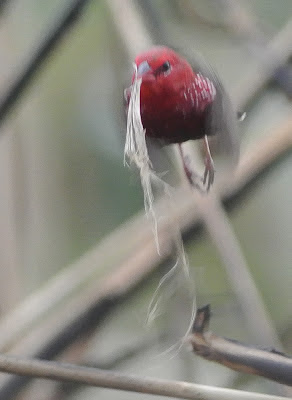 An early morning trip up Doi Suthep with David Lindo produced a few interesting birds, but the volume of tourist traffic meant that it was a little less peaceful than we had hoped, and the journey back into town was a total traffic jam.

Spent the immediate Christmas aftermath with my wife's extended family in Pitchit.  This gave me a couple of mornings birding in the local (intensively farmed) rice paddies, testing out my new Nikon V1 mirrorless camera body, mounted on my 300mm f4 AF-S lens.  The results are very promising, but I'll write a proper review once I've got used to using it (and read the instruction book!).

The species I connected with were pretty unsurprising but a welcome change from my regular patch species with Painted Snipe, Oriental and Black-browed Reed Warblers, Asian Golden Weaver, dozens and dozens of Dusky Warblers, a couple of pairs of Red-wattled Lapwing, several Cinnamon Bittern Intermediate Egret and a Grey Heron.

All images below were taken with the Nikon 1 V1.

Another visitor from London, innit!

For this morning's visit to Suan Rot Fai I was joined by David Lindo for his second trip to the park (he visited in December last year).  The highlight this morning was getting much better views (and photos) of the female Cyornis flycatcher which I'm still presuming is a Chinese Blue, pending making time to sit down and study the images carefully. The Cyornis flys are very tricky and the shape and colour of the throat does not seem to be classic of Chinese Blue, so I'm still a bit hesitant on this bird's ID.

EDIT: Having now had a good look at the images, I'm happy that this bird is a female Chinese Blue Flycatcher (note the paler throat contrasting with the breast).  Given the markings on the gape it seems likely to be a first winter female. 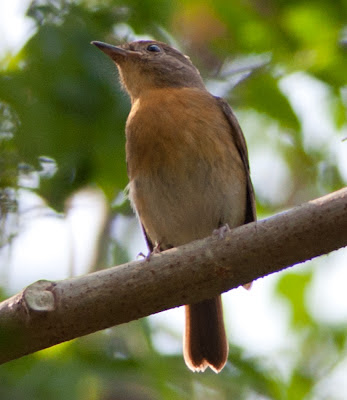 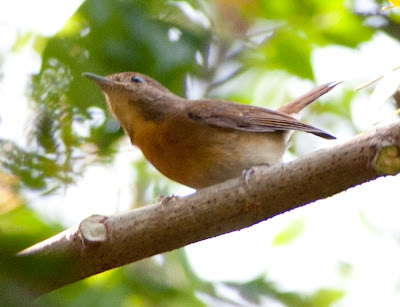 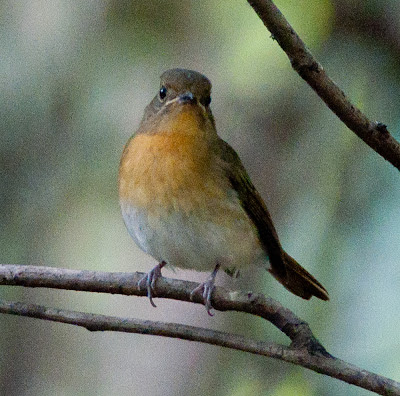 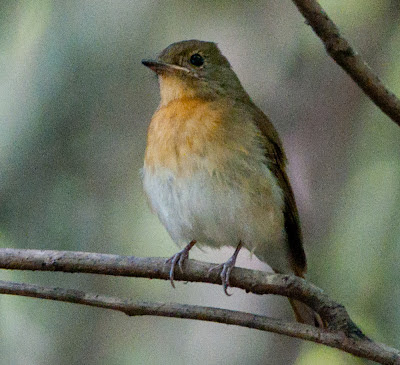 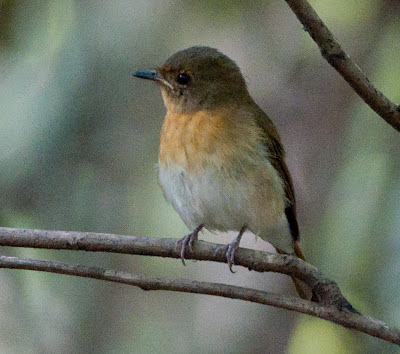 Here are a few other pictures taken this morning... 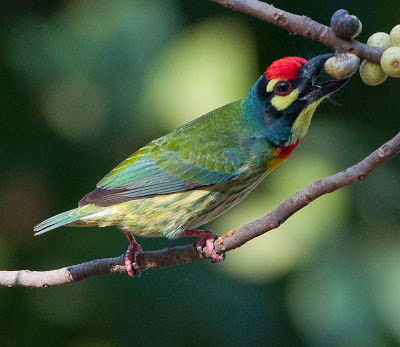 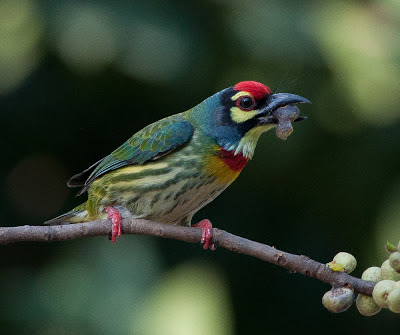 London birder Richard Bonser joined me for my circuit of Suan Rot Fai this morning. Highlights in two and a half hours included a rather smart male Thick-billed Green Pigeon (my second patch record, following a female in December last year), a female Cyornis sp. which was probably a Chinese Blue Flycatcher, both Spotted and Asian Barred Owlets, two Dusky Warblers (only one seen) and a Pale-legged Leaf Warbler heard. 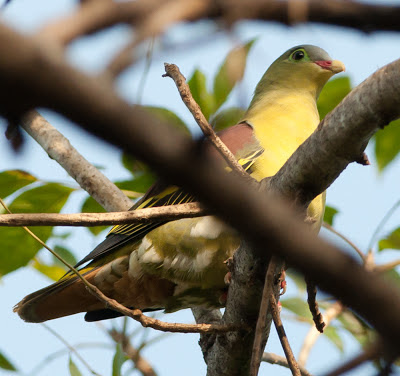 Posted by David Gandy at 6:51 PM No comments:

Quite a lot of activity on the patch this morning, with pride of place going to the adult male Orange-headed Ground Thrush which is still present. Other goodies included my highest counts of Night Herons (three juvs and one adult), and Open-billed Storks (five).

Drongos included one Black and three Ashy (two leucogenis and one salangenis), whilst three Barn Swallows included one tytleri-type individual.


*Note that I use the name Pale-legged Leaf Warbler to some degree as a "superspecies", given the difficulty in identifying Sakhalin Leaf Warbler. Whilst Sakhalin has not been knowlingly recorded in Thailand its winter-time distribution is poorly known and so it seems possible that it does/will occur.  Today's bird was very grey on the head, with quite a whitish supercilium contrasting with the pale yellow double wingbar. The bird called occasionally - a liquid "tu-lut" which was somewhat clipped at the end; this is a different call from the standard "tink" which  is often given repeatedly, but it is a call that I am familar with as I heard the call today before seeing the bird and I recognised it as a PLLW call.
Posted by David Gandy at 1:09 AM No comments:

Whilst on the patch yesterday morning I caught a glimpse of a passerine that flushed in front of me but gave me such poor views I had no idea what it might have been.  Despite searching for it for about twenty minutes I found no further sign of it and as such tried to convince myself that perhaps it was simply a badly seen Oriental Magpie Robin (!), though the mystery bird had crossed my mind momentarily as possibly being a thrush of some kind.

When I started working the patch again this morning I almost didn't bother checking the area where I had seen this "mystery bird", but remembering yesterday's incident, and with a nagging doubt that it really wasn't a Magpie Robin I decided to have a quick look.  Checking the precise location of yesterday's sighting I found nothing, but  some dense canopy nearby yielded a Taiga Flycatcher and so I decided to give this area a few minutes attention and was about to move on when what was obviously yesterday's bird (based on size and jizz) flew out of the canopy and back to the area where I had seen.  I didn't get much on it but I felt I knew what it was, and when it perched up (rather distantly) I could see that it had an orange head!

I walked straight back to the original location and sat quietly, waiting to see if it would show, and a few minutes later it appeared in front of me,  about 4 metres away... 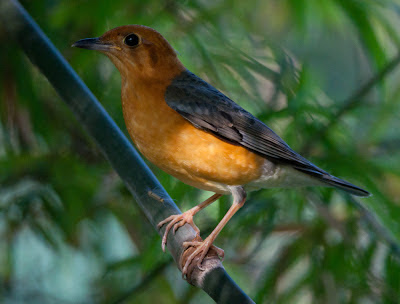 This is the first time that I have seen Orange-headed Ground Thrush on the patch, though I was aware that it had been recorded in the past. This species breeds in Thailand, but is also a winter visitor.  My experience of the species in the past has all been in good quality forest in various parts of SE Asia so it is really nice to find such a forest denizen in the middle of Bangkok's magatropolis!

Walking around the Ornamental Gardens at the patch didn't reveal too many other surprises, though I did finally come across my first Thick-billed Warbler of winter 2012/13.  However on my way out I found a SECOND Orange-headed Ground Thrush  - this one a stonking male...


So my prediction yesterday of Zoothera action in the park had been correct, though the location was entirely wrong and I couldn't have predicted two seperate sightings on the same day!
Posted by David Gandy at 2:17 PM 2 comments:

I spent a couple of hours at Suan Rot Fai this morning, the highlight being 1-2 Black-winged Cuckooshrikes, an occasional winterer/ passage migrant here in central Bangkok.

Not much else of note - a few Taiga and Asian Brown Flys, good numbers of Black-naped Orioles, Coppersmith Barbets and common sturnidae species enjoying the continued abundance of trees in fruit, and a couple of Black-capped Kingfishers.

Notable by their absence so far this winter are Thick-billed Warblers - I have not seen a single one on the patch yet (normally seen from early November until April), and I have also noticed reduced numbers of Brown Shrikes (only one seen on my last visit and a single heard today).

One bit of (good?) news is that a boardwalk and nature trail has been installed in "The Clump" - a previously impenetrable, isolated patch of bushes in the ornamental park which I have always thought held Zoothera potential but had been very hard to work. Now it can be easily accessed but I guess it remains to be seen how much disturbance it gets...
Posted by David Gandy at 3:30 PM No comments:

I thought these  would be of interest - a series of images of the recently split Kamchatka Leaf Warbler, plus an image of a nominate Arctic Warbler taken at the same location (Ashmore Reef, Australia).

Kamchatka Warbler is likely to occur in Thailand but has not yet been confirmed, as far as I am aware.
Posted by David Gandy at 8:46 PM No comments:

Given that today is the King of Thailand's birthday it was fitting that the highlight of  walk around Suan Rot Fai was Thailand's biggest kingfisher - a Stork-billed.  This is only the second time I have recorded this species in Suan Rot Fai (the other time being when I first started watching the site in autumn 2008).  Today's bird was watched in deep cover, spending a long time repeatedly whacking a large prey item senseless before swallowing it whole.

The same area held one of several groups of Blue-tailed Bee-eaters that I saw this morning, plus Black-capped, White-throated and Common Kingfishers - not bad: one pool with four species of Kingfisher on it - just 100 metres from a busy main road in downtown Bangkok!