After a pretty productive morning on the patch, which had already produced only my second record of Grey-headed Lapwing (again a flyover) and the Lineated Barbet, I walked into "the secret garden", an area that is off limits to the public, but which has lots of big trees and good cover, and was where the "mystery Phyllosc" was photographed on 17th Jan (exactly two weeks ago).  Having drawn a blank on it when looking earlier in the week I had little hope of relocating it, but given that it was a Saturday I could allow time for a more exhaustive search.

Soon after entering the secret garden I found a ground-loving phyllosc which turned out to be a Radde's Warbler.  I only get to see a couple of Radde's each year on the patch, so wanted to give it some attention and try to get some photos.  As it moved towards the blow of a small hillock I was watching it with my bins and then realised that somewhere behind it, in a low tree was another phyllosc.  As soon as I got focused on this second bird I knew I had re-found the "mystery warbler"!

This thing clearly had  dark sides to the crown and a well marked lateral crown stripe, plus two wingbars and a strong yellowish  suffusion to the underparts.  I set about securing photos of it and putting the news out to a few local birders who had been contributing to the discussion on the ID since the first photo appeared on Facebook last week.  The bird moved "nuthatch-like" along branches and peering underneath them, and though I lost it a number of times it reappeared and eventually offered some close views.

Hopefully more information about the ID of this bird will be forthcoming soon, but it is clearly part of the "Blyth's Complex" and seems to fit Hertart's Leaf Warbler of the nominate race goodsoni. Hertart's is regarded as a Chinese endemic (some photos on Oriental Bird Images show winter birds from Hong Kong).

During the time I watched it it did not vocalise, but it did take an interest in a tape of goodsoni contact call that I had on my iPhone. 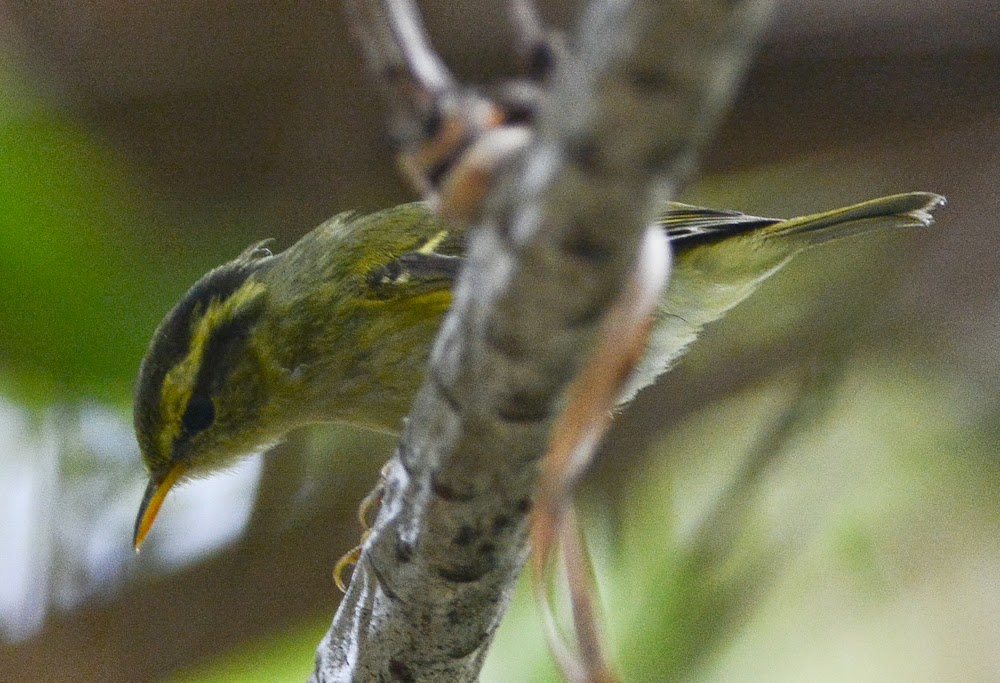 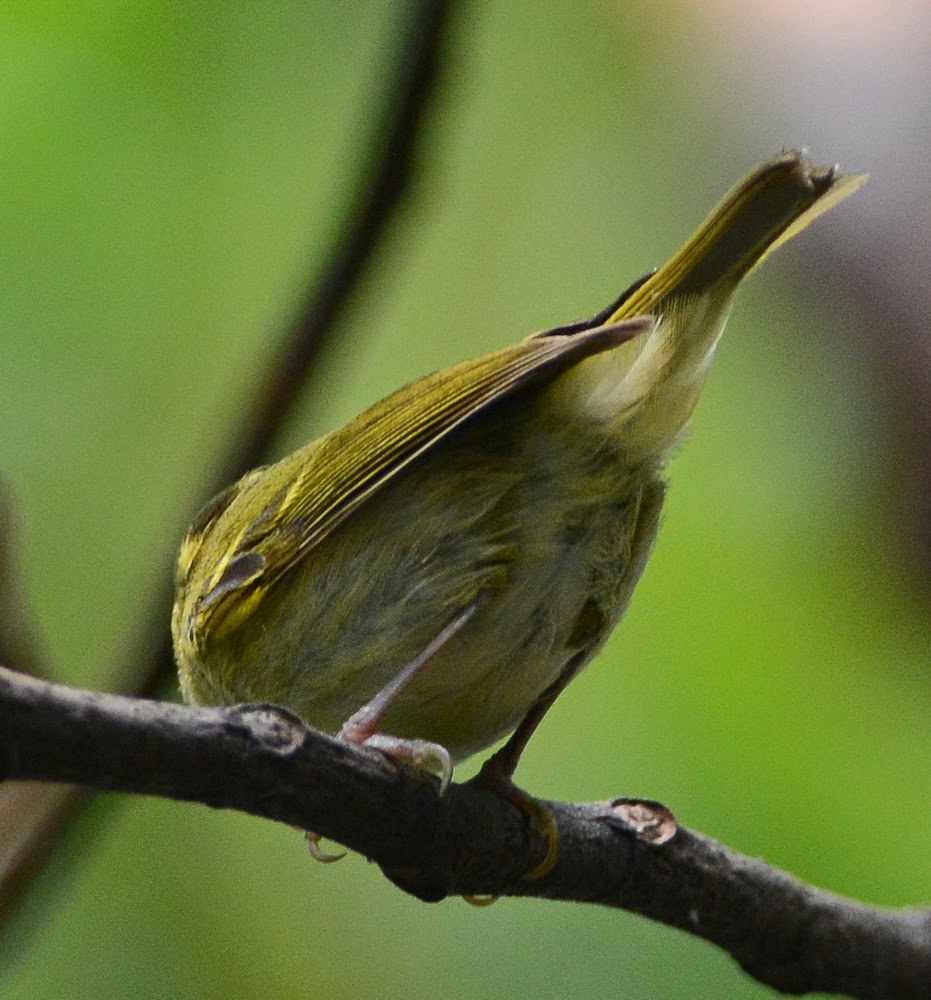 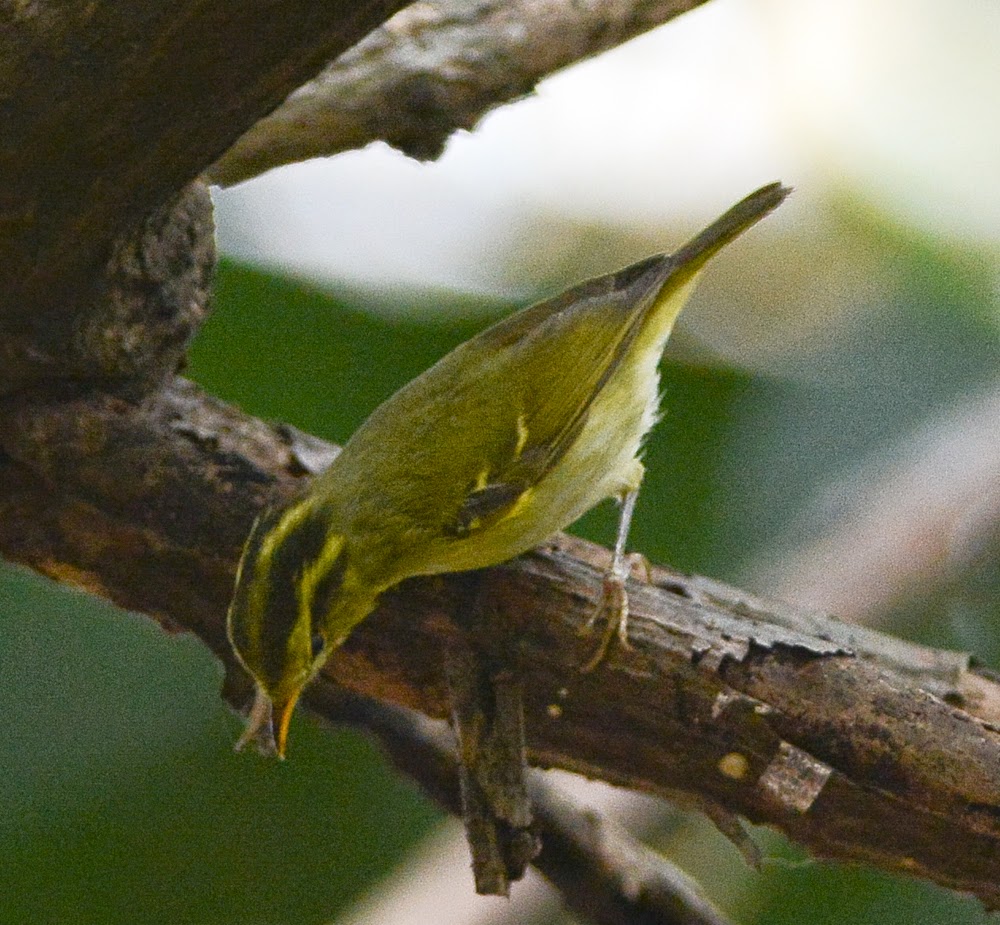 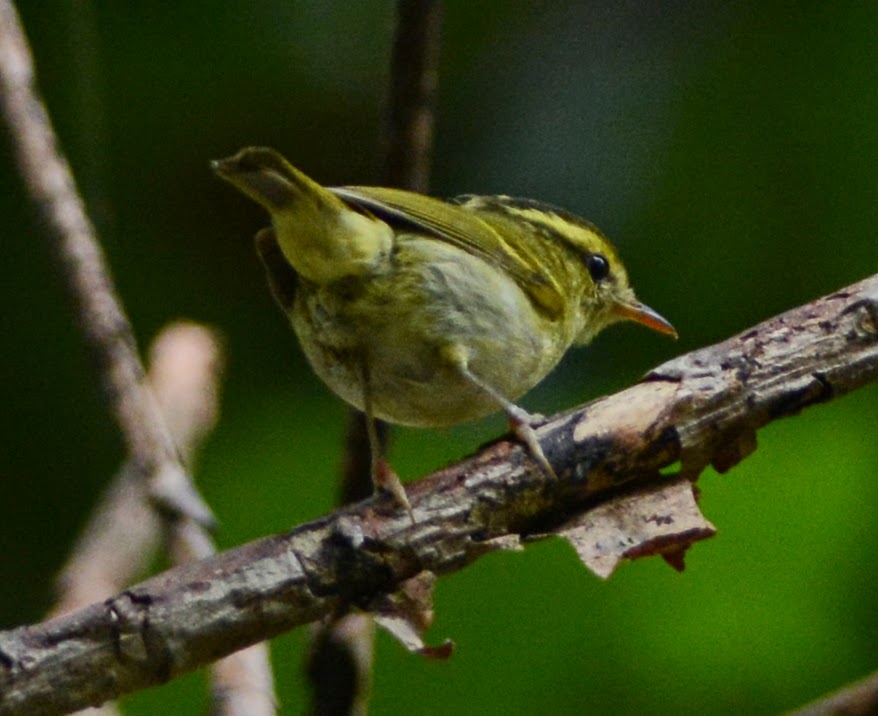 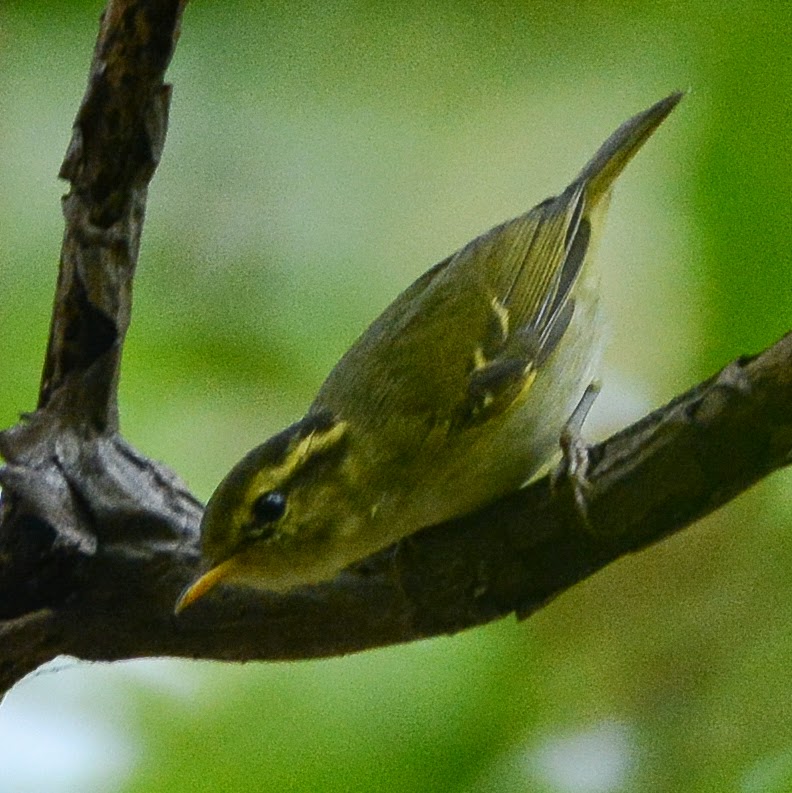 
I visited Suan Rot Fai this morning to search for what is increasingly looking like an Ogilvie-Grant's Leaf Warbler that was photographed there on 17th January.  This obscure phyllosc is, I believe part of the "Blyth's complex" but the taxonomy and distribution seems to be somewhat confused (at least, I feel confused by it). There was no sign of the warbler, but I managed to pull out a patch tick in the form of a Lineated Barbet, a mid-winter wonderer, and my first mid-winter record of Siberian Blue Robin. The only other notable bird was a Pale-legged/Sakhalin Leaf Warbler.

Posted by David Gandy at 1:10 PM No comments:

I had a great weekend on Doi Lang, one of the northern peaks in Chiang Mai province. I'll update this post with more text soon, but here’s a quick summary of notable birds: 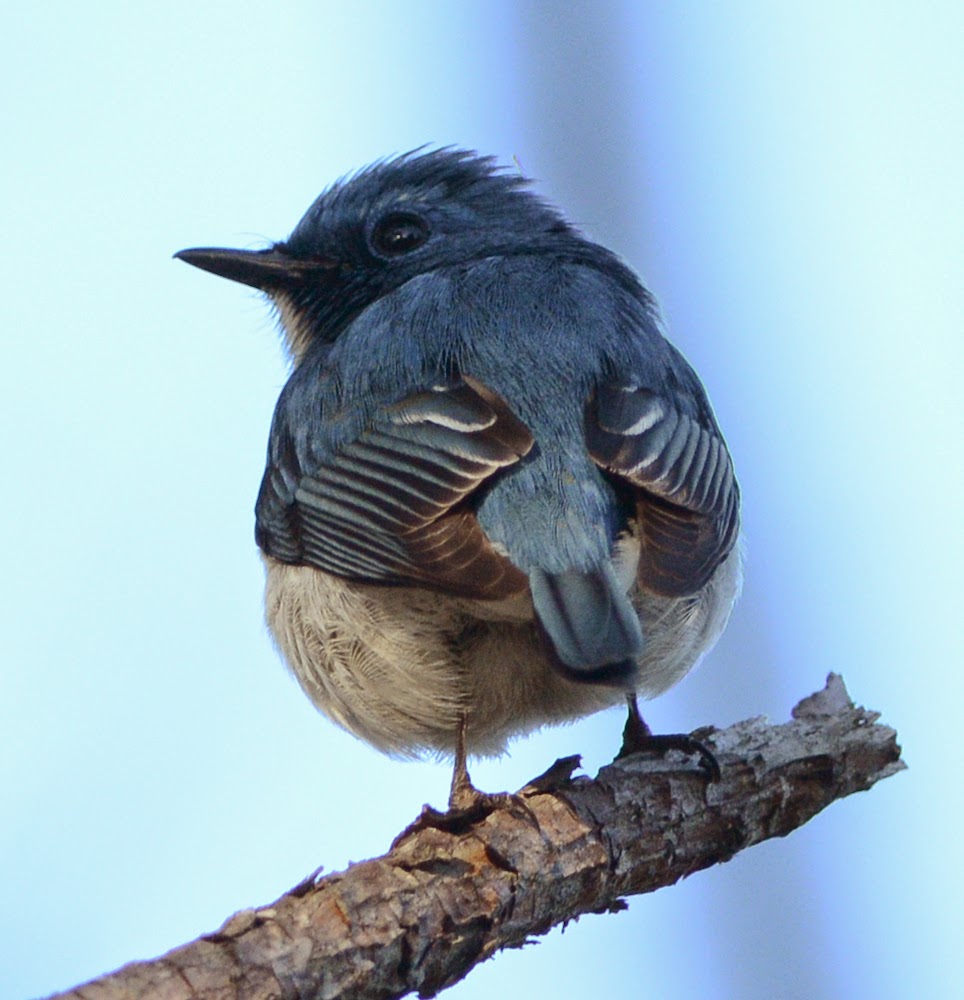 I am working in Mae Sot today and tomorrow so this morning visited the arable land close between the airport and the Myanmar border.  This area is very dry at this time of year, and bird activity was relatively low, but highlights included a group of 5+ Red-billed Blue Magpies and two Pied Harriers (adult male and adult female).  I heard several Siberian Rubythroats but the only one I tried to coax out of the dense undergrowth was not playing ball. 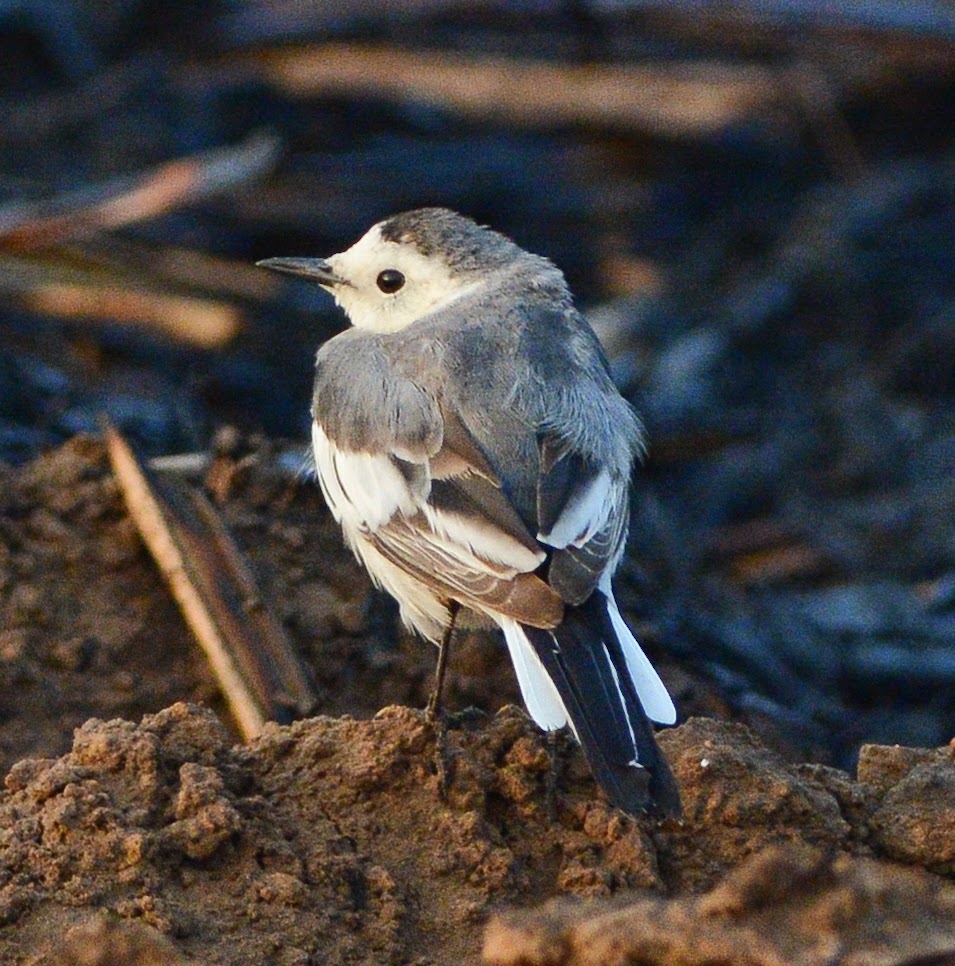 Posted by David Gandy at 9:45 AM No comments:

Excellent day out with Andy Pierce, focusing on Nong Pla Lai rice fields in the morning. This area of single-crop, low intensity farmland is well known for its wintering raptors and soon after sunrise we picked up Osprey, Peregrine, Kestrel, Black, Brahminy and Black-winged Kites! The thing I was really interested in targeting was an area where Andy had found a flock of circa 100 Yellow-breasted Buntings last winter and had already been noted to be holding 50 or so individuals this winter. After a short drive down a dirt road and a stroll through the fields we located a flock of 50+ Red-throated Pipits feeding in a recently harvested ricefield, then located the Yellow-breasted Bunting flock, at least 30 birds strong and frequenting a hedgerow.

I have lived in SE Asia for more than 12 years but this was the first time that I have seen Yellow-breasted Bunting in Thailand. Indeed the only other time I had seen this species was in Cambodia in 2007. This lack of familiarity with Yellow-breasted Bunting is surely in part due to my typical modis operandi when birding (I typically do my city centre patch, or salt pans for waders, or the forests of Khao Yai or Kaeng Krachan, none of which encompass much pro-bunting habitat). However I do regularly spend a few hours per month birding rice paddies around Mae Sot, on the Myanmar border, but I have never had a sniff of any kind of bunting there. The sad fact is that Yellow-breasted Bunting is now hugely threatened, indeed it is listed by BirdLife International as globally endangered. Round (2008) talks about roosting sites in Thailand that used to hold tens of thousands of individuals that have been systematically hunted as food by commercial operations that would follow the birds all winter.

After watching these fantastic buntings for a while we followed the path further out into the dry paddies for several hundred meters in different directions, hoping to find additional buntings as the habitat seemed to look pretty similar  wherever we looked, but all we found were a few Plain-backed Sparrows and a Wryneck. Last winter Andy stumbled upon this bunting flock completely by accident whilst looking for raptors and I really think that trying to locate wintering flocks of buntings here is looking for the proverbial needle in a haystack. Thanks go to Andy for agreeing to show me these birds.

Our next stop was a short drive to the well known Nong Pla Lai raptor view point. On arrival in this area we picked up an Aquila eagle about 50 meters above the road. The light was shocking (with the sun now getting pretty high in the sky, and little shade to speak of). Andy determined that the Eagle had a pale head and eventually through better views and reviewing photos we confirmed that it was a near-adult Eastern Imperial Eagle. It was then joined by a Greater Spotted Eagle, allowing direct comparison of size, structure and plumage. We then drove further north a few kilometers to where I had seen Steppe Eagle a few years previously - upon arrival I picked up three more Aquilas - two Greater Spotted Eagles and a juv Steppe Eagle! There are other raptors in this area which we missed today, including both harriers and Booted Eagle, so clearly Nong Pla Lai deserves it's reputation as a magnificent raptor habitat.

Eventually we pointed the car south and headed for the wader-rich coast around Laem Pak Bia. On our way to a lunch stop we  paused to check a gull flock which contained a juv Heuglin's Gull, then after lunch checked out the best area for Nordmann's Greenshank, picking up just three sleeping individuals (it was low tide, so most waders were out on the mud flats), then on to the Abandoned building which gave us many of the common waders that can be expected at this time if the year. On the way back to the main road we stopped for a "dirty twitch"...very dirty in fact as it was for a Brahminy Starling ( rare in Thailand) at the stinking rubbish tip. After a short wait Andy picked up the bird which we watched for the minimum amount of time possible given the less than beautiful surroundings. 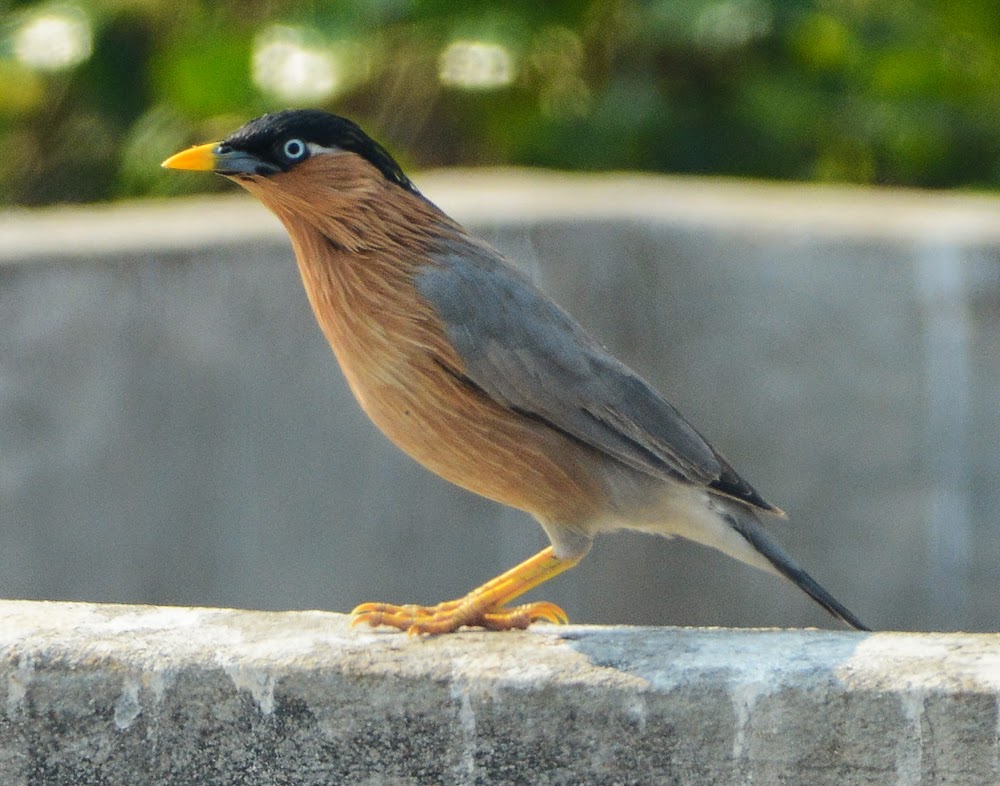 A quick look at the Kings Project revealed no surprises, but as usual gave nice views of species such as Whiskered and White-winged Black Terns, plus an obliging White-throated Kingfisher. We then headed  for Pak Thale for some more wader action, with Andy keen to get a Thai tick in the form of Dunlin! We scanned the pools often frequented by Spoon-billed Sandpipers and eventually Andy realise that the bird closest to us was a Dunlin (joy!) whilst I picked up a flock of 19 Red-necked Phalaropes spinning in ever decreasing circles (we didn't run into any Spooners).

After dropping Andy back at the Kings Project I decided to check the Nordmann's Greenshank pool again in the hope of getting a larger count and some better photos but they were absent, however the same pool ow held a group of eleven Asian Dowitchers, which I watched as the sunset. A very nice end to an excellent day.