In case you missed the press release by the Spoon-billed Sandpiper (SBS) Task Force yesterday, would like to share the news with everyone on this list (and ask you please to pass it on to your contacts and colleagues) that survey of the Rudong and Jianggang coast, Jiangsu Province, China earlier this month found 140 Spoon-billed Sandpiper and 1200 Nordmann's Greenshank!

The Korea-centric English language version of this SBS Task Force press release is posted on the Birds Korea home-page, along with a couple of really choice images:
http://www.birdskorea.org/BK-Startpage.shtml

The Korean language version is at:
http://www.birdskorea.or.kr/BK-Startpage.shtml

There should be other versions of this press release posted by other SBS Task Force members appearing soon on websites near you...

During the same survey period of October 15th-19th, led by SBS in China and supported by a team of international shorebirders from the Task Force we also found a flock of 53 Dalmatian Pelican (this number had increased to 79 on the Jiangsu coast as of October 27th, news via Zhang Lin), a single flock of 2550 Saunders's Gull (and many more smaller flocks), several groups of Black-faced Spoonbill (including at least two colour-ringed birds), several Relict Gull and large numbers of other shorebirds.

Much of this tremendous area is under imminent threat of reclamation, as elsewhere in the Yellow Sea.

In order to help avert another Saemangeum (where still four Spoon-billed Sandpiper this October nonetheless), there is an urgent need to support the local organisation SBS in China  so that they can keep up with their great work.  Please visit their facebook page (at:  https://www.facebook.com/pages/Spoon-billed-sandpiper-in-China/188097854557191) and please find ways to help them and the tidal-flats they are are working to conserve.

As everyone knows, there really is no point in having a captive flock somewhere if there is no habitat for these birds to use in the wild.

Now in the hope of more good news from the wintering grounds...

A pleasant walk in cool sunny weather at the Ministry of Public Relations early morning produced a Spangled Drongo as the highlight, with single Brown Shrike, two Asian Brown Flycatchers and three Yellow-browed Warblers also in attendance.
Posted by David Gandy at 9:57 AM No comments:

A brief wonder around Suan Rot Fai this morning produced more of the same in terms of migrants.  Perhaps the highlights were an Arctic Warbler and a Great White Egret (seen occasionally high over head, but today's was the first I have seen in the Park for a couple of years). Herons were well represented today with 1-2 Little Herons,  six Little Egrets, several Cattle Egrets, at least three Night Herons (all juvs) and multiple Pond Heron spp.


Other land bird migrants included Ashy Drongo, 10+ Taiga Flycatchers, two Asian Brown Flycatchers, a couple of Yellow-browed Warblers, at least five Blue-tailed Bee-eaters and the first Paddyfield Pipits I have seen in the park for a while. 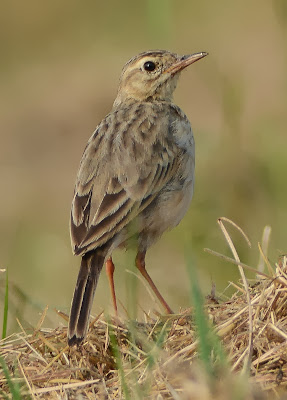 Posted by David Gandy at 7:37 PM No comments:

I've seen White-rumped Sharmas several times in Suan Rot Fai, but have always been rather suspicious about their origin, mostly because there used to be a pair in The Ramble, of which the male had a "gammy" eye, which I put down to captive origin.  This bird and the Park's proximity the the weekend market (which sadly still hosts some trade in wild birds) has always left me in little doubt that Sharmas in the park were wire-hoppers.

However yesterday (26th) I ran into one, a 1st winter bird from what I could tell, in the grounds of the Ministry of Public Relations. It made me think a little bit more carefully about the species' potential for natural occurence.  Round (2008) states that White-rumped Sharma is resident on the Bangkok area, and I found myself thinking that I had no reason with this bird to suppose that it was anything other than a wanderer.  My suspicion therefore is that some genuinely wild birds do occur.

The last couple of days have seen clear skies and cooler morning temperatures.  The air is no longer humid, and so I dare to suggest we may not see any rain until April (well, may be).  This all made birding this morning rather pleasant at the MOPR, with more of the same on the migrant front: the Asian Paradise Flycatcher is still hanging around (now present for over a week), a poorly seen large phllosc which looked good for Eastern Crowned Warbler, one leucogenis Ashy Drongo and single Asian Brown Flycatcher, Yellow-browed Warbler and Brown Shrike.
Posted by David Gandy at 11:41 AM 2 comments:

Today's pre-work walk around the grounds of the Ministry of Public Relations produced my first Common Kestrel record of the winter. Kestrels are uncommon winterers in Bangkok, and whilst I have seen several before in the city, the species still eludes my patch list!

There are apparently two races that occur here (one that breeds in Siberia and the other in China), though I think you might be hard-pushed to ID one to race in the field.  Certainly the views I got this morning (briefly, as it was being chased by a couple of Large-billed Crows) put the bird beyond that level of classification.

Vocalisations in the Arctic Warbler complex

Some useful information has been published by Yoshiki Watabe on kantori, and was also put onto BirdForum yesyterday by Richard Klim:


All three species have been recorded in Thailand, so hopefully these calls can aid field identification.

A short visit to the Ministry of Public Relations early morning gave me brief views of an immature female Cyornis flycatcher spp. which had an extensively pale lower mandible and rather washed-out pale orange throat.  The choices in terms of assigning it to species are Hill Blue, Hainan, Chinese Blue and Large Blue but I'm not yet in a position to suggest which it was (though I'm leaning towards Hainan) - the more one looks at the complexities of Cyornis identification, the less certain things can become, so I need to do more reading.

The MOPR also delivered my first Black-naped Monarch of the autumn and the Asian Paradise Flycatcher that I found last Friday is still present today.  Other regular migrants included three Brown Shrikes, one Yellow-browed Warbler, three Asian Brown Flycatchers, one Black-naped Oriole and one leucogenis Ashy Drongo.
Posted by David Gandy at 11:15 AM No comments:

Suan Rot Fai from 7.30-9am produced three migrant Accipiters, but only two gave views allowing me to ID them to species - the first a juv Chinese Sparrowhawk, the other a juv. male Shikra.


The other highlight came late on in the form of three "Pale-legged" Leaf Warblers (impossible to separate from Sakhalin LW in the field, although we now know that Sakhalin occurs in Thailand as a passage migrant, one was trapped and ringed yesterday at Khao Dinsor).

I also had a count of 11 Cattle Egrets, which might be the highest number that I have had in the Park.
Posted by David Gandy at 11:09 AM No comments:

Getting back into the swing of things with a short visit to the Ministry of Public Relations this morning after two days of heavy rain and leaden skies.  This morning was bright and sunny, with many leaves and a few small branches brought down by the storm, making things feel almost autumnal.

Birding was also pretty autumnal with quite a lot of migrants around.  As soon as I left the house an squadron of seven Blue-tailed Bee-eaters sailed overhead, leaving their roost and on getting the the MoPR the first bird I heard was a Yellow-browed Warbler (one of three that I had this morning).  This was  followed by a calling Monarichidae, which eventually showed itself - an very smart Asian Paradise Flycatcher of the migratory race incei.

Other migrants included two Drongos - one seen poorly and not identified, but the other an Ashy Drongo, which was of either the race mouhouti or salagensis (distant views only); 1-2 Brown Shrikes and one Asian Brown Flycatcher.

There is a lot on the move, so this weekend should offer some excellent patchwork...
Posted by David Gandy at 1:50 PM No comments:

Perhaps predictably, after handing in my Masters project on Sunday night I suddenly felt overwhelmed with exhaustion and spent 18 out of 24 hours sleeping and succumbed to the cold virus that I'd been ignoring since last week, so I've not yet got into autumn properly.

I had a quick walk near home in the grounds of the Ministry of Public Relations where I found a very crisp Eastern Crowned Warbler, three Yellow-browed Warblers, one Asian Brown and two Taiga Flycatchers and a juv Brown Shrike.
Posted by David Gandy at 10:56 PM No comments:

After six long months of self-imposed birding exile, I am now a free man released from the shackles of masters degree study.

It feels a bit unreal to be so unhindered, and I've got a few plans that have been put on hold until now - like working out how to use the sound recording gear I bought in New York back in May, and making full use of it here in Thailand.

This morning I made a short foray to the nearest bit of greenery to our house, to see if there were any of my much-neglected avian friends from Siberia knocking around.  The best I could manage were three Yellow-browed Warblers and three Brown Shrikes. Other migrants included two Blue-tailed Bee-eaters and a high altitude drongo sp in migration mode.

An enormous bill in front of me

Still writing my masters thesis, so birding is a no go until next week, however on Tuesday I had to drive to Chonburi to pay an enormous tax bill (don't ask!), on the way home I was about 30 minutes west of Bangkok's Suvarnabhumi airport when we had a Spot-billed Pelican over the highway.

That was my birding highlight of October so far.  Whoop.

Posted by David Gandy at 9:17 AM No comments: