My friend Charles Davies was on his round of 'goodbye' parties last week, before  his departure to a new job in Africa. On the evening of 15th he was having drinks with some friends at Bangkok's Pullman Hotel - a swanky five star place in an unremarkable part of town (close to the huge Victory Monument intersection).  His cocktails were somewhat enliven when one of the bar staff at the outdoor bar pointed out a BLUE-WINGED PITTA that had just been released by the staff, and was hopping around on the decking, and between tables!  Charles didn't get the full story (we presumed it had flown into a window and stunned itself), but he managed a couple of record shots which he duly gripped me with, before he jumped on a plane and left Asia behind.  That's quite a nice way to go out...

Having seen these pictures I was determined to make a serious effort at scoring a migrant "BwP" on my local patch, but the weekend had me busy with domestic chores, and the early part of the week had me dealing with work, but yesterday (21st April) I made the effort to fit in an hour on the patch before dark.  I decided that given that a B-w P had been seen in the city in recent days, it was worth concentrating my effort on "The Ramble", the largest patch of woodland that I have found in the Park, as this has the most cover (and we all know how much Pittas like cover!).

I wondered into The Ramble and found the male of a pair of feral White-rumped Sharmas (which must have escaped from the weekend market and are now resident in this part of the park), then moments later something with a "strange" shape flicked past the Sharma and perched nearby - I raised my bins to it and was elated to be confronted with my very own own BLUE-WINGED PITTA!!!!!!!!

The Pitta moved out of view, then shot across the Ramble, giving me brief views of the upperparts, and landed out it view again.  Moments later it flew back, higher this time , giving me views of the underparts.  It showed briefly in flight once more but then disappeared.  The light was too bad for photos (it was 6.10 pm), and it was much to fast in any case.  Two things about the bird seemed a little strange - firstly it looked smaller than I remembered Blue-winged Pitta to be (I've seen about fifteen individuals before, but haven't seen one for two years), and secondly when I saw the upperparts in flight I wasn't struck by the big white primary patches that BwP exhibits.  I checked Robson (2008) when I got home, which notes smaller size and smaller primary patches as features of Fairy Pitta (which was only recorded in Thailand for the first time in April 2009).  I was pretty confident that it wasn't a Fairy, mainly because my views had been so short that I'd just been overwhelmed by technicolour and hadn't taken in the minutae of plumage detail.

I went back first thing this morning (22nd April) to put my mind at rest, but alas the bird was nowhere to be found - so I'm left to assume it was BwP, and I'm now much more aware of the things to look for to confirm that the next one isn't a major rarity. But hey: Any Pitta + my local patch = WOW!

Also seen this morning was a migrant FOREST WAGTAIL.
Posted by David Gandy at 10:13 AM 3 comments:

A second afternoon at Khok Kham, this time with a focus on photographing waders along the Mangrove Conservation Area access track. The pools either side of the road here are tidal, and so when the mud is exposed this area offers a good opportunity to use the car as a hide. 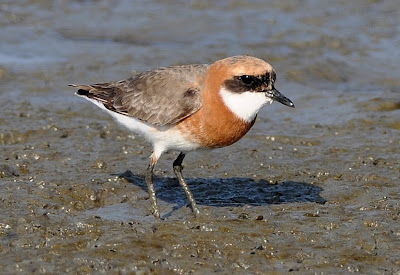 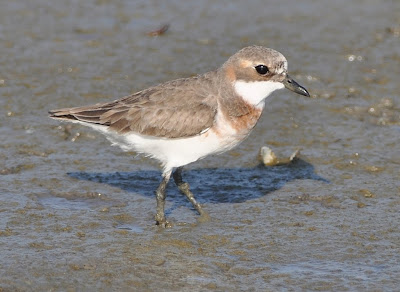 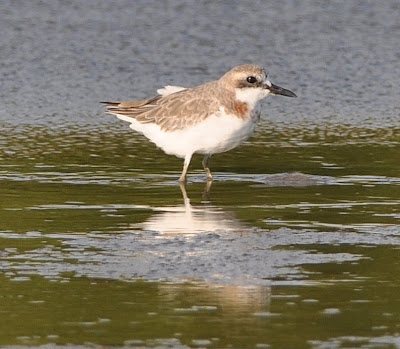 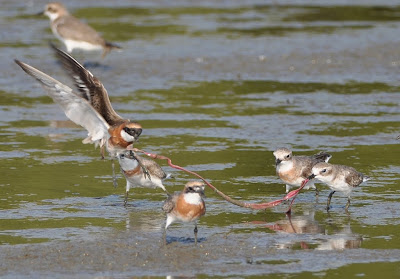 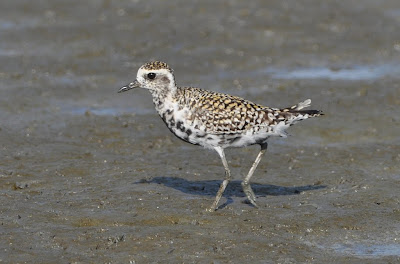 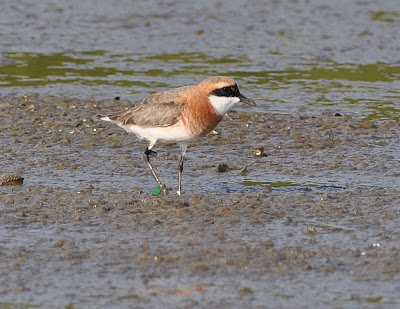 This leg-flagged Lesser Sandplover is from the Thai ringing programme 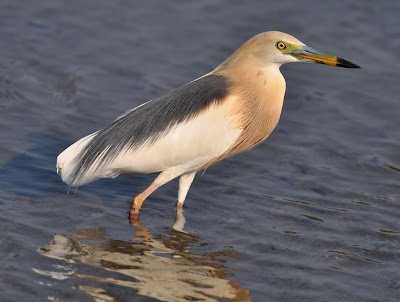 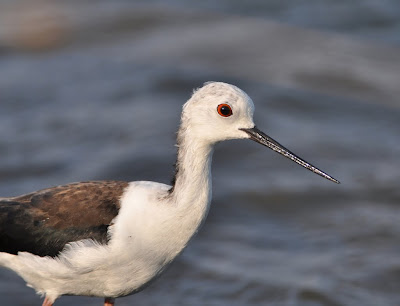 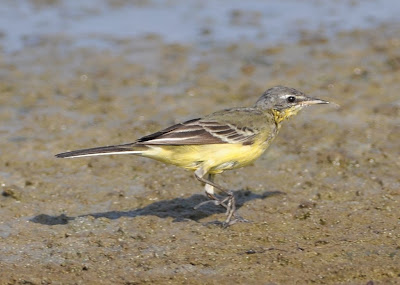 tschutschensis type Eastern Yellow Wagtail
Posted by David Gandy at 8:29 AM No comments: 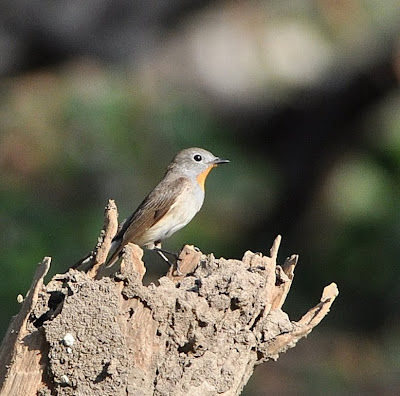 ...aswell as a better-than-normal opportunity to photograph a Thick-billed Warbler... 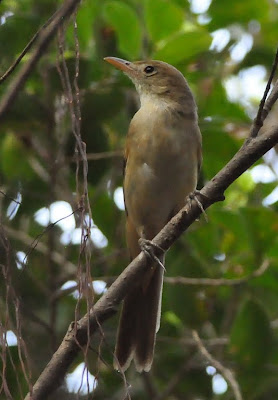 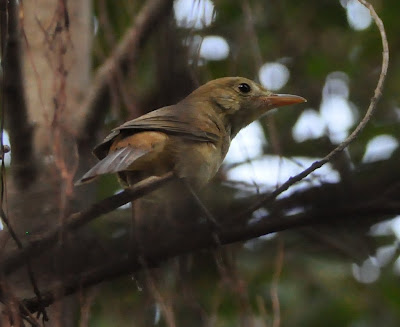 I also got great views of a couple of breeding plumaged Javan Pond Herons that were buzzing around the main lake. 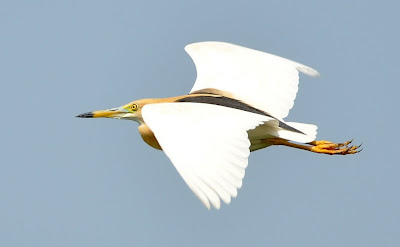 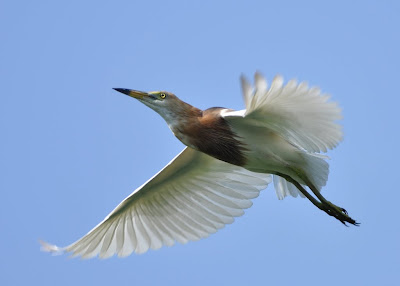 Posted by David Gandy at 7:59 AM No comments:

A walk around the patch in the late afternoon heat (more than 35 celcius!) to look for migrants was disappointing, with just single Taiga Fly, Asian Brown Fly and brief views of a Brown Shrike.

Perhaps the highlight was this obliging Asian Koel (usually hard to photograph). 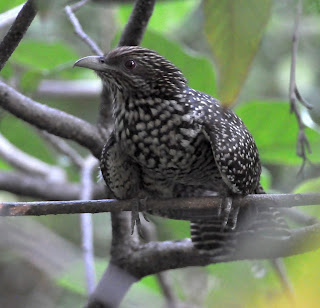 Posted by David Gandy at 7:43 AM No comments:

Afternoon at Khok Kham in the hope of scoring Asiatic Dowitchers on passage and in fine plumage - failed on that count (Mr Tee had seen one in the morning), but lots of waders in equally fine plumage to compensate.  Most notable was a large flock of Knot spp, including at least 50 Red Knot feeding and a another 300 knot spp roosting at a distance that made specific ID difficult, though most appeared to be Reds.  It seems to have been a good winter for them in this part of Asia (numbers are normally much smaller).  Rarest bird of the day was a breeding plumaged Little Stint, there were lots of Red-necked Stints around too, but none close enough to photograph. 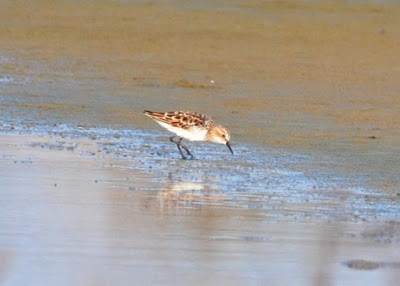 Little Stint
There were also good numbers of Whiskered Terns around, most of which had attained breeding plumage, plus small numbers of White-winged Black Terns which were well on their way to doing the same. 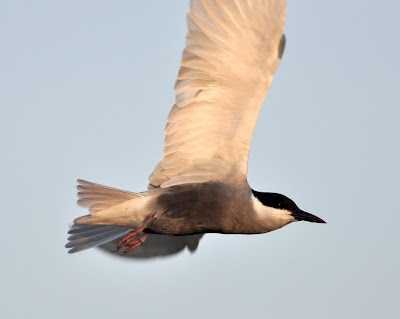 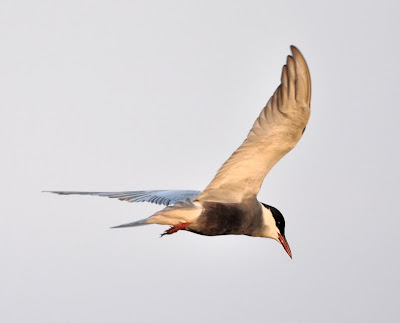 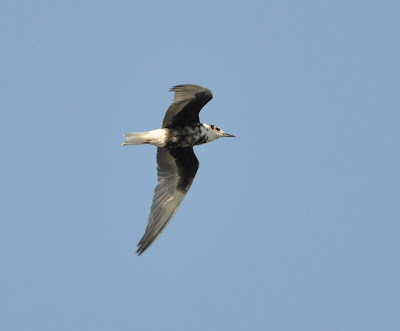 WWBT
Posted by David Gandy at 7:38 AM No comments:

Boobook on the patch

Visited Suan Rot Fai before work for the first time in a very long time (more than 2 months in fact). 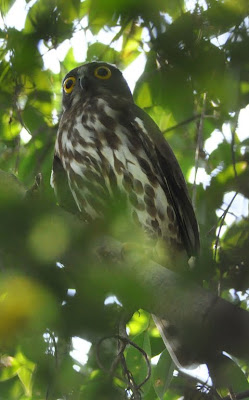 The most interesting record today was this BROWN BOOBOOK in "The Ramble".  Not sure weather to consider it as a genuine record or a probable escape from Chatuchak Market - Round (2008) notes that the species is found in parkland, but indicates that most Bangkok records are mid winter...

Perhaps I'll just tell myself it's a migrant! 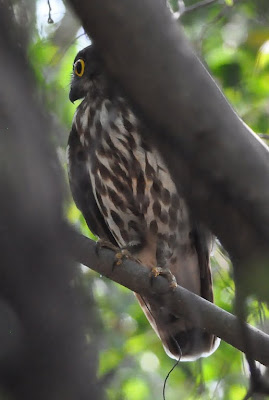 
EDIT: 2nd October 2011.  In the light of new identification features being determined this bird has now been identified as a Northern Boobook.  for more information see the post here.
Posted by David Gandy at 11:32 AM 1 comment: