Chris Collins and I visited Sumatra from 19th-27th April, on a trip that I have wanted to make for many years - I was not disappointed!

We stayed at Pak Subandi's (subandi.homestay@gmail.com) and arranged for his family to make all logistical arrangements and guiding for us.  They collected us from Padang Airport, and returned us there at the end of the trip.  They provided all food and drinks, accommodation (comfortable but rather basic with hot water for bathing provided in a bucket), transport to and from the head of Mount Kerinci Summit Trail and for the excursions to the Tapan Road, and guiding by Subandi's son-in-law, Dwi. We flew with Air Asia from Kuala Lumpur to Padang, the drive from Padang to Kersik Tua (the village where Subandi's homestay is located)  is seven hours on winding roads through beautiful rural Sumatran countryside (lots of tea and coffee plantations, cinnamon being harvested on the roadside, good views of extensively forested mountains in many places).

Below I provide details of both sites and annotated systematic lists of species recorded at each:

Mount Kerinci Summit Trail
We birded from the trail head at 1,700 m asl up to the "Cochoa Shelter" at approx 2,200 m asl.  The trail is clearly marked and easy to follow.  It is steep in some areas, and after rain could be quite slippery - good walking boots or wellington boots would be appropriate footwear.  We had rain most days we visited, but only once did we get rained off the mountain with unbirdable conditions.  We got a total of three evenings nightbirding here (two nights lost to rain).  We used ponchos and umbrellas to stay dry and protect our gear whilst  birding in the rain. The forest also has various less distinct trails cut by Subandi's family, and we also followed pig trails through the forest on a couple of occasions in an attempt to connect with a calling Schneider's Pitta.

We spent a total of four whole days, plus one dusk and one dawn birding this site.

Black Eagle – two over forest near the Cochoa Shelter, one seen over a village between Padang and Kersik Tua

Red-billed Partridge (Sumatran endemic) – one male whistled in buy Dewi at Air Minima and watched calling. Other birds occasionally (ie one or twice per day) heard singing on various parts of the trail.

Salvadori’s Pheasant (Sumatran endemic) – one pair seen on two dates on trail above Base Camp Shelter. Male seen displaying (standing erect, opening wings and quivering them), apparently heard calling  several times (a bubbling sound but with a resonant squirrel-like “chip” given repeatedly (CC and Dwi thought this was actually a squirrel calling, but the sound seemed to be following the pheasants and I maintain they were uttering it).


Sumatran Green Pigeon (Sumatran endemic) – seen twice in fruiting trees. One the first occasion poor views were obtained of one bird (identified by call), then later in the week circa 20 were seen in a fruiting tree.  We usually heard this species once or twice each day.

Rusty-breasted Cuckoo – one seen below Base Camp Shelter

Barn Owl -  one seen in open country below forest edge 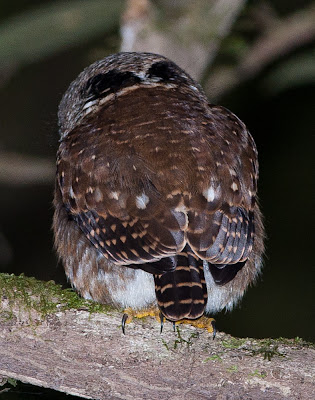 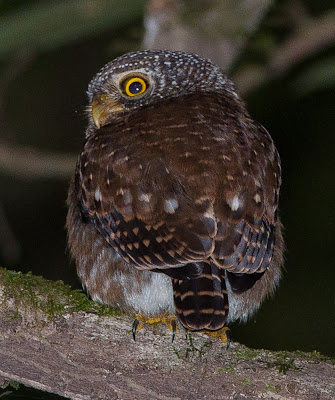 Mountain Scops Owl – one heard on our first evening, below the base camp shelter

Short-tailed Frogmouth – One found on the nest during the middle of the day, just a few meters off the path between Air Minum and Camp Cochoa.  Two others heard calling (and one seen poorly) whilst night torching at and below Base Camp Shelter.

Salvadori’s Nightjar - heard on our first evening, then on another evening one was calling around the Base Camp shelter.  When the tape of the bird's call was played it immediately flew in and hovered in front of us for about 5 seconds before perching up at about 10 meters range for five minutes.

Sumatran Trogon (Sumatran endemic) – seen on each of our four full days on the trail.  Other trip reports indicate that visiting birds sometimes struggle with this species, so we came to the conclusion that April is a good time of year to find it (we also saw the species on both visits to the Tapan Road). We normally ran into Trogans one or twice a day, usually above the Base Camp Shelter.  Sightings included a juvenile with one adult. 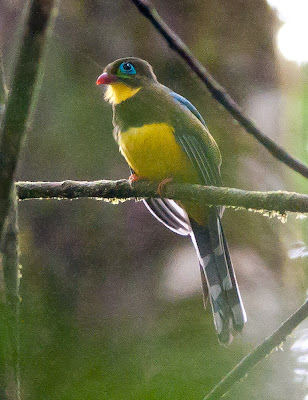 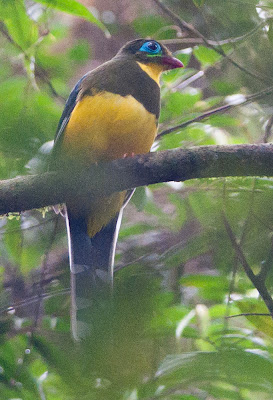 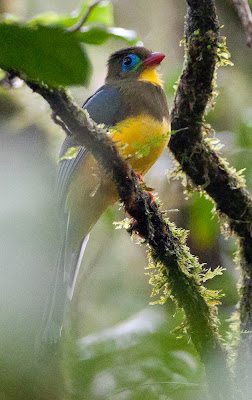 Maroon Woodpecker - seen two or three times and heard on at least two other occasions.

Schneider's Pitta  (Sumatran endemic) - one flushed off the path by Dwi on our first evening.  Two birds singing close to the Base Camp Shelter (one in each gully either side of it on three evenings).  Despite employing a number of strategies (walking quickly, walking slowly, sitting and waiting on various long, straight sections of path, following pig trails to get closer to singing birds, baiting with meal worms) we failed to see a Schneider's Pitta.  We got very close to a singing bird on our last evening and thought we had it cornered, but it outsmarted us.  Most people who are lucky enough to encounter this species seem to see it along the main trail in the last afternoon.  Birds were only heard singing after 4pm, and we had one respond briefly and distantly to tape on our final morning.

Green Magpie – heard several times and one pair seen. Probably only two birds involved in our records, which might reflect pressure on the species from the cage bird trade

Pygmy Wren-babbler – common by voice and seen well on several occasions.  The call was noticeably different to birds heard in northern Thailand, with a "chit" between each of the "three-blind-mice" notes of the song.

Spot-necked Babbler – three seen below the Base Camp shelter with a flock of Grey-throated and Golden Babblers.

Long-tailed Sibia - one group seen at the Cochoa Shelter


White-browed Shortwing – several in song and occasionally seen around the Cochoa Shelter.

Sumatran Cochoa (Sumatran endemic) – two seperate sightings on one date! One female type seen just above the fallen tree between Air Minum and Cochoa Shelter, apparently coming in to tape after trawling for at least 30 minutes.  One male singing around Cochoa Shelter, eventually seen poorly after using play back on and off for about 30 minutes (this bird had been singing before we arrived at the Cochoa Shelter, heard by another guide). Sumatran Cochoa is regarded as one of the most difficult birds on Mount Kerici, however most trip reports I read indicated that with persistance (sometimes over many days!) the species could be pulled in by trawling.  I really didn't think we were going to connect with this species, so seeing two birds (and finding a frogmouth nest in between!) made this a very special day indeed.

Siamang (Endangered) - family groups of this huge gibbon were seen daily, sometimes very well.  This made me very happy as I had missed them on a previous trip to Fraser's Hill.  Birding in a forest filled with Siamang song is a pretty special experience, though you can't hear much else!

The Tapan Road
We made two day trips to the Tapan Road which is at least a two hour journey from Pak Subandi's.  If making this journey we recommend that you leave Subandi's no later than 4.00 am to make sure you are on site for birding around 6.00 am when it gets light. We birded from the Ranger Station at the top of the road, down as far as the third bridge, walking some of the way and taking the car to other locations as required. The Tapan Road is generally easier birding  than Kerinci and made a nice break from the routine of trying to connect with its infamously difficult target birds. We had a lot of sun on both days (take a good hat), and some heavy showers.  The forest here is very extensive and I would very much like to spend a week or two camping at the ranger station (which you can apparently arrange) and exploring the length of the road, which apparently has good forest for many kilometers below where we got to.

We did not make time for nightbirding on the Tapan Road due to the long drive needed to get back to Subandi's homestay, but we imagine that it would be rewarding.

Oriental Honey Buzzard - one seen over the road


Blyth’s Hawk-Eagle -  one or two seen, including one being mobbed by a pair of very feisty Ashy Drongos

Sumatran Peacock-pheasant (Sumatran endemic) – on our first visit several were heard on the upper part of road, then one seen by incredible luck; a female standing in a sun-lit gully where Dwi took me to show where he had seen one two years ago (his only previous sighting!).  It transpired that there was a large fruiting fig tree next to the gully, and the Peacock-pheasant was presumably feeding on the fallen fruit. I watched it for about three minutes whilst is stood stationary in the gully and was able to obtain several record shots of the bird, which I believe may be the first photographs of the bird in the wild (at least, I cannot find any on the internet). Chris was about 50 meters away (photographing butterflies!) but managed to get there in time to see the bird and watch it walk out of view, it's tail catching the light to show us a striking green and purple sheen.

On our second visit two days later a Peacock-pheasant was seen briefly in the same gully at least three times. 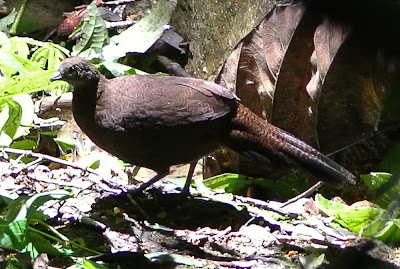 Sumatran Green Pigeon (Sumatran endemic) – at least 50 in the fruiting tree over the Peacock-pheasant gully on both days. One pair were seen copulating.

Little Cuckoo-dove -  seen one two occasions on the upper road.

Sumatran Owlet (Sumatran endemic) – heard once on each visit

Glossy Swiftlet - several seen over forest on both visits

Whiskered Treeswift - several seen over forest on both visits 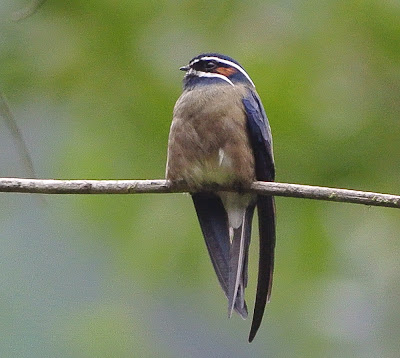 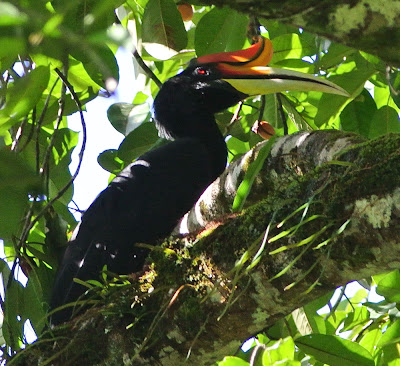 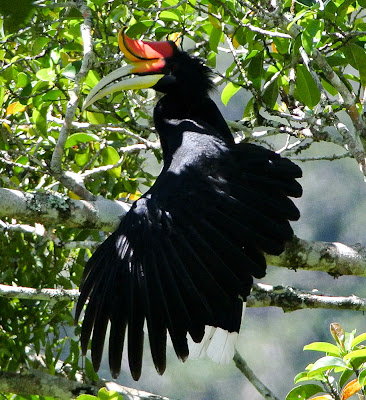 Fire-tufted Barbet - apparently common, seen many times in fruiting trees along the road

Graceful Pitta (Sumatran endemic) – three seen very well (including a juv), at two locations where birds were whistled in and rewarded with meal worms. Another  three birds were heard calling. All birds seen gave amazing views down to 2 meters for prolonged periods. 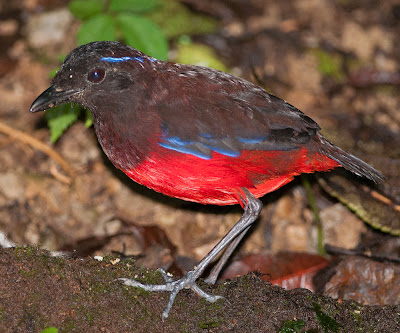 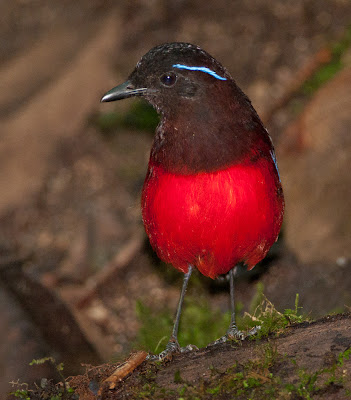 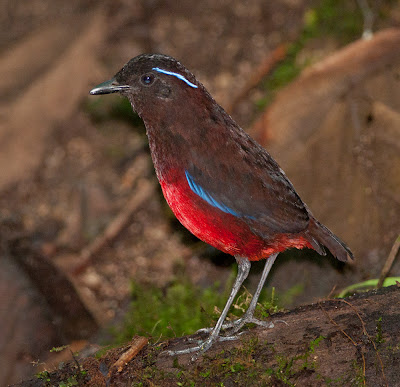 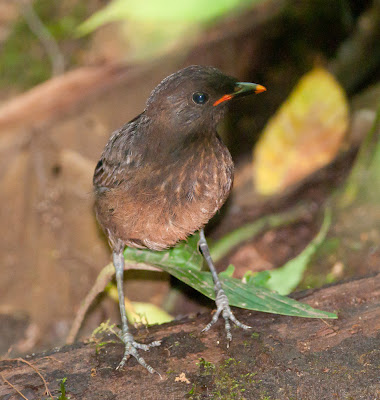 Sumatran Blue-winged Leafbird (Sumatran endemic subspecies) – What a cracker! This species was seen twice (one pair and a single male) on our first visit, but none were seen on our second visit. Several were also seen in cages , for sale outside pet shops on the outskirts of Padang city.

Black and Crimson Oriole - seen once on each visit.

Grey-throated babbler - seen in mixed flocks on both visits.

Sumatran Whistling-thrush (Sumatran endemic) – one in the “Peacock-pheasant gully”.  This was the only one seen during the whole trip.

Yellow-bellied Warbler – one in song and seen along road.

Chestnut-crowned Warbler – 1-2 seen in a mixed flock near the second bridge.

Hill Prinia - seen several times in scrub. Looked very different from the illustration in McKinnon, and from birds seen in mainland SE Asia.

Fulvous-chested Jungle Flycatcher - seen twice (once on each visit) in different locations.  Both birds were seen in low streamside vegetation.

Verditer Flycatcher - seen on two occasions on the upper road.

Oriental White-eye – a flock of white-bellied lowland birds were seen near the Ranger Station.

Siamang (Endangered) - heard on both visits

Hog Badger (Near-threatened) - one seen on roadside, trying to escape our vehicle by running up a steep bank (which it failed to scale).  The desperate beast then turned around and ran across the road and down a slope into forest.  Possibly the most inelegant departure of any mammal I have ever seen.