Early morning walk around the Ministry of PR produced two more Arctic Warblers, this time picked up by their buzzy "tzik" calls, then seen at close range. 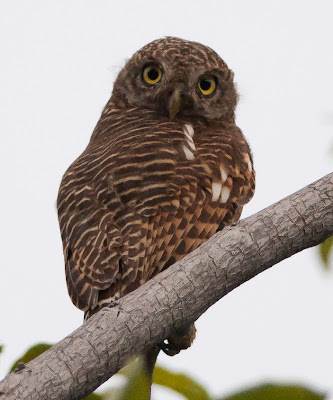 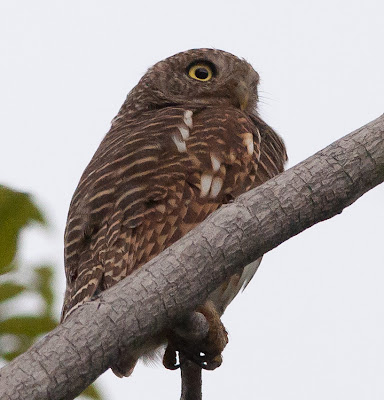 Posted by David Gandy at 7:49 AM No comments:

Here is a short list of migration studies (not just birds) using sat-tags and geo-locators.  These studies really valuable for migration studies and education - they can be a great tool for inspiring people to think about wildlife (which can only be a good thing!).

A late afternoon walk at the Ministry of Public Relations produced a couple of hoped-for-but-not-expected encounters, with a female Yellow-rumpled Flycatcher and my first Arctic Warbler of the autumn.
Posted by David Gandy at 8:19 PM No comments:

Patch from 0615-0915, more evidence of migration with two  Yellow-rumped Flycatchers (including a very juicy male) being my first of the autumn. More unexpectedly a group of at least three Blue-tailed Bee-eaters moved through - two weeks earlier than my previous first date for autumn passage. 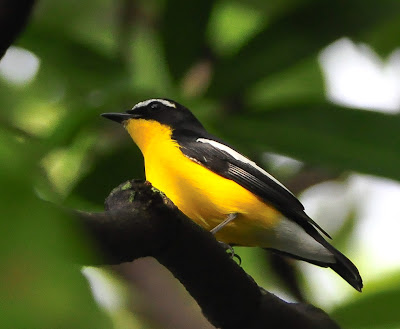 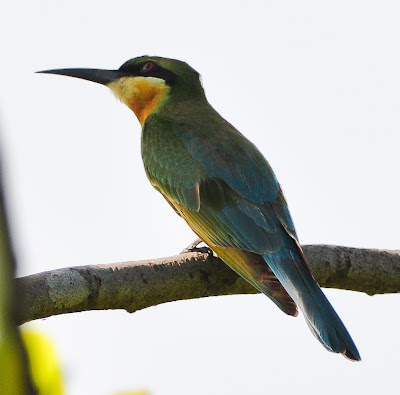 0700-0930 at Suan Rot Fai. I have started checking the patch earlier this autumn in the hope of picking up some species that are known as early migrants - Yellow-rumpled Flycatchers start passing through in mid-August, as do a couple of the rarer flycatchers - Brown-streaked (a split from Asian Brown) and Dark-sided. Asian Brown by contrast doesn't usually appear until about the third week of September.

Whilst re-reading the species account for Dark-sided Fly in Phil Round's Birds of the Bangkok Area last night, I noted that it is a scarce migrant, with Brown-streaked represented by a handful of records in August - so I made a mental note not to get my expectations up too much... This meant that I was very pleased, but not entirely surprised when I found a Muscipcapa flycatcher this morning. It gave me a couple seconds of bad views, then disappeared for a few minutes before reappearing and showing well, enabling me to confirm it as Dark-sided of the race siberica. This is a patch tick for me - the ninth species of flycatcher I have seen here. 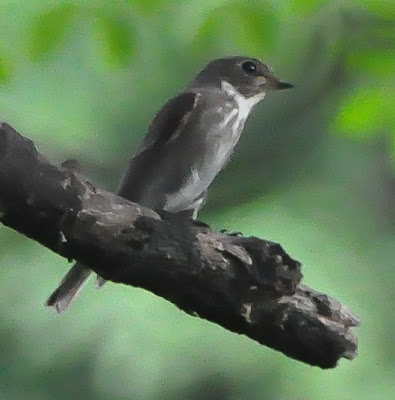 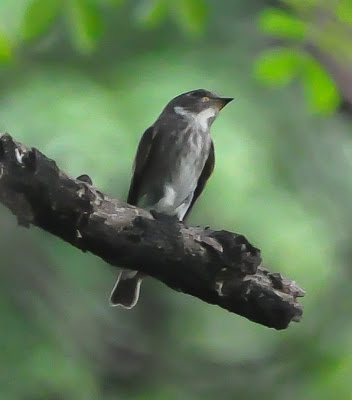 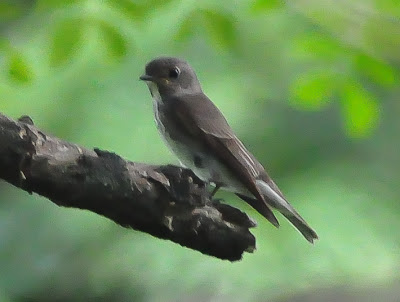 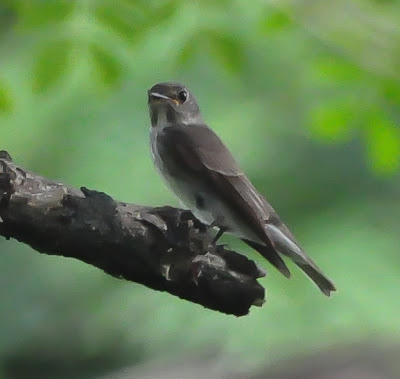 These photos are not particularly good, but I am posting them because I think a lot of people struggle with identifying the Muscicapa flys. In the field this bird looked long-winged, the bill has pale colouration restricted to the base of the lower mandible, and the upper breast is streaked, turning to a uniform dark suffusion on the sides.  One feature often mentioned in the literature is the dark centres to the undertail coverts, though it is also noted that this can be hard to see - but is seems to be visible in these pictures (I didn't see it in the field).

So that's it - passerine migration is underway! 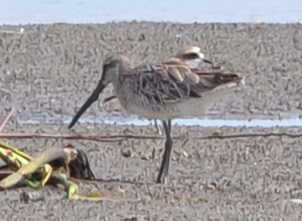 Asian Blurwitcher
Just back from a very enjoyable afternoon's wader-watching at Khok Kham foreshore on the rising tide.  There are already good numbers of waders back, particularly Curlew Sandpiper and Lesser Sand Plover, and a flock of 250 Black-tailed Godwits was joined by a group of 19 Asian Dowitchers.  Common Redshank and Greenshank were present in good numbers, with small numbers of Whimbrel, and Marsh Sandpiper, two Wood Sandpipers and a single Broad-billed Sandpiper. The pools further inland held at least 20 Long-toed and small groups of Red-necked Stints and a single Turnstone.

I saw Mr Tii, who said that he had seen the long-staying Sharp-tailed Sandpiper last Friday (12th August). The highlight of the non-waders was a single Osprey.
Posted by David Gandy at 6:03 PM No comments:

Went on a 20km cycle through the flooded rice paddies of Pitchit (the northern end of the Central Plains) with some very enjoyable birding along the way - one field held a colony of Asian Golden Weavers, Yellow Bitterns outnumbered Cinnamon, and Black by 5:1, we saw a single Black-shouldered Kite, c.10 Pheasant-tailed Jacana, and a couple of big flocks of Asian Openbills. A single Wood Sandpiper, small groups of Barn Swallows and a single Blue-tailed Bee-eater gave a taster of the migration that lies ahead (bring it on, please!).
Posted by David Gandy at 10:29 PM No comments: 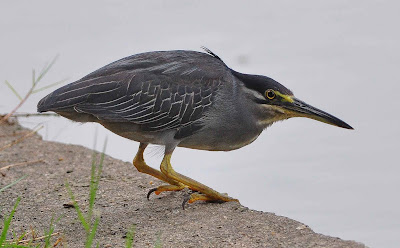 Little 'eron
Walk around the patch produced more than expected, with my first Barn Swallow of the autumn, a fly-over Asian Openbill (only my second record on the patch), nice views of Yellow Bittern and Little Heron, and an Asian Barred Owlet being hotly pursued by a flock of Small Minivets, Common Iora and Streak-eared Bulbuls. 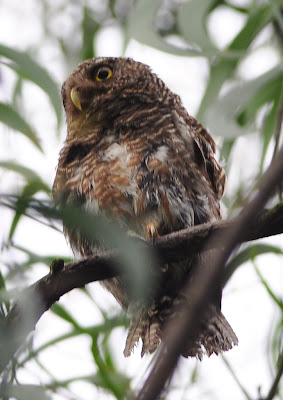 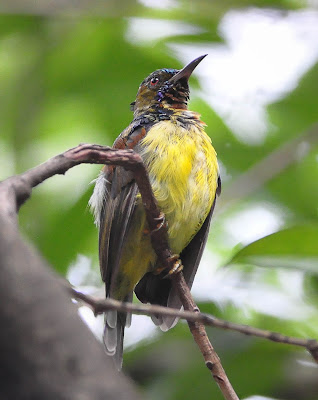 Brown-throated Sunbird
The afternoon was spent driving north to Pitchit province to see my wife's family. I managed to pick up a (tarty) year tick in the form of Cinnamon Bittern, plus a couple of Oriental Pratincoles.
Posted by David Gandy at 10:27 PM No comments:

I have always accepted that my local patch is too big to cover exhaustively on the short visits that I make, and from the forays that I have made away from my usual favored spots, I have been disappointed by a lack of favourable habitat. However, a week or so ago I was looking at the Googlemap of Suan Rot Fai and noticed a large area of trees that I had not "ground truthed" in the southern section of the park, so this morning I went and checked it out.  It actually looks rather promising - quite undisturbed by other park users, and with a nice mix of vegetation.  I then went a bit further and discovered a small island that looks to have good potential, and can be accessed by a series of stepping stones.  This area seems very much undisturbed and has loads of cover, but seems pretty workable by a single birder. Six weeks from now I'll know whether or not this potential has any chance of being fulfilled.
Posted by David Gandy at 11:40 AM No comments: